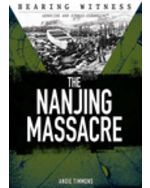 While World War II is well known for genocide, the war itself eclipsed key events that preceded and contributed to the greater conflict. This book explores the Nanjing massacre, a mass murder and rape committed by Japanese soldiers in China during the Second Sino-Japanese War. This conflict would later merge into World War II itself. Sidebars highlight topics such as the Japanese destruction of military records about the massacre and Chinese general Chiang Kai-shek. A timeline chronicles the Chinese decision to move operations from Shanghai to Nanjing and the harrowing events that transpired.