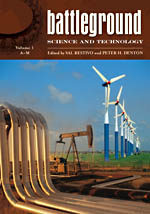 The modern world is filled with debate and controversy, and science and technology - the most characteristic features of the modern world - are not immune. Science and technology are implicated in many if not all of the issues, troubles, and problems students are likely to come across in their classes and in their everyday lives. Science and technology serve as a primary pathway to understanding front page headlines on everything from war to AIDS, and from oil exploration to global warming. Battleground: Science and Technology examines the most hot-button issues involving science and technology and provides a balanced assessment of the arguments on all sides of the often strident debates. The approximately 100 issues examined in Battleground: Science and Technology include topics in the brain sciences, including the controversies over the cause of autism and the reliability of memory, as well as the debates over parapsychology; debates surrounding information technology, such as only privacy, the impact of video games on social behavior, and the advent of virtual reality; the complexity over drugs and medications, such as the testing of the efficacy of medications, the war on recreational drugs, and the costs of pharmaceutical research; and hot-button topics that are constantly in the news, such as evolution and creationism, DNA testing, stem-cell research, and genetically modified organisms. Each entry provides a list of accessible resources useful for further research.