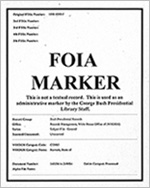 Records of the Persian Gulf War

By the end of the Iraq-Iran in August 1988, Iraq was virtually bankrupt. Iraq pressured both Saudi Arabia and Kuwait to forgive the debts, but was refused. In July 1990, Iraq condemned Kuwait's government for not respecting their oil quota, thus driving down prices, and threatened to take military action. Later that month, Iraq moved 30,000 troops to the Iraq-Kuwait border. On July 31, negotiations between Iraq and Kuwait in Jeddah failed. On August 2, Iraq launched a warplane invasion, bombing Kuwait City.

The Iraqi invasion of Kuwait met with international condemnation and brought economic sanctions against Iraq by members of the UN Security Council. President Bush deployed American forces to Saudi Arabia and urged other countries to send their own forces to the scene. An array of nations joined the "Coalition of the Gulf War."

This collection consists of documents from several White House Office of Records Management Subject File categories and the Staff and Office Files. They chronicle the Bush White House's response to the political and military crises in the Persian Gulf:

A significant amount of material consists of files of the National Security Council (NSC).