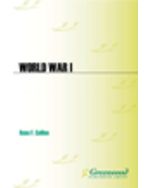 Primary documents from the World War I era bring to life the causes, events and consequences of those tumultuous and violent years. Varied perspectives provide a valuable overview of the many and often complicated reactions by Americans to Pre-war European politics, Archduke Ferdinand's assassination, the sinking of the Lusitania by a German submarine, the major battles fought, and of the eventual and controversial entry into the war by the United States, among others. This will be a valued resource for researchers seeking to tap into contemporary attitudes toward events long gone.

Front Cover.
Half Title Page.
Debating Historical Issues in the Media of the Tim.
Title Page.
Copyright Page.
Contents.
Series Foreword.
Chronology.
Introduction: The American Press in World War I.
1: Who Started It? The Allies.
2: Who Started It? Germany.
3: Who Started It? Society.
4: The Atrocities of War.
5: War and the American Economy.
6: Arms Sales to the Allies.
7: Preparedness.
8: U.S. Foreign Policy in the World War I Era.
9: German Culture.
10: Traitors and Immigrants.
11: Pacifism.
12: Race and Language.
13: Socialism and Labor.
14: Joining the War: Arguments of Patriotism and Politics.
15: Joining the War: Arguments of Religion and Civilizing Ideals.
16: Virtue and War.
17: Women and War.
18: Free Speech During Wartime.
19: War and the Character of the Soldier.
20: War and Technology.
21: Searching for Peace.
22: The League of Nations.
Selected Bibliography.
Index.
About the Author.