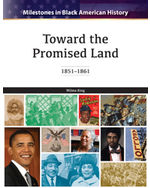 Toward the Promised Land: 1851-1861, part of the Milestones in Black American History series, tells the fascinating story of black America in the years just before the Civil War, when abolitionists such as Frederick Douglass, Sojourner Truth, Harriet Beecher Stowe, and John Brown sought to shatter the South's "peculiar institution," slavery.

Front Cover.
Copyright Page.
Introduction.
Chapters.
1: A’n’t I a Woman?: Slavery, Women’s Rights, and the Christiana Affair.
2: Uncle Tom’s Cabin and the Power of the Pen.
3: The Road to Independence: Emigration to Canada and Liberia.
4: The Color Line: Free Blacks and Slaves.
5: I Wrote Passes for My Grandmother: Education Opportunities.
6: The Storm, the Whirlwind, and the Earthquake: Abolitionists and the Underground Railroad.
7: The Legacy of Anthony Burns: The Kansas-Nebraska Act and Scott v. Sanford.
8: We Must Not Be Enemies: Harpers Ferry and the Run Up to the Civil War.
Support Materials.
Further Reading.