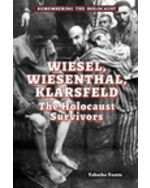 Two out of every three Jews in Europe died in the Holocaust. For those who survived, life continued to be bleak after the war since they had neither homes nor families to which they could return. Author Tabatha Yeatts tells the harsh stories of those who lived through the Holocaust concentrating on the aftermath’s effect on survivors. The fate of many Nazi war criminals is described as well. This book is developed from The Holocaust Survivors to allow republication of the original text into ebook, paperback, and trade editions.