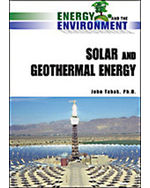 Solar and Geothermal Energy describes two of the least environmentally disruptive sources of power by which electricity is generated today. In addition to describing the nature of solar and geothermal energy and the processes by which these sources of energy can be harnessed, this accessible new book details how they are used in practice to supply electricity to the power markets. In particular, students are introduced to the difference between base load and peak power and some of the practical differences between harnessing an intermittent energy source (solar) and a source that can work virtually continuously (geothermal). Each section also contains a discussion of some of the ways that governmental policies have been used to encourage the growth of these sectors of the energy markets. An interview is included with John Farison, director of process engineering for Calpine Corporation at the Geysers Geothermal Field, one of the world's largest and most productive geothermal facilities, in which he discusses some of the challenges of running and maintaining output at the facility.