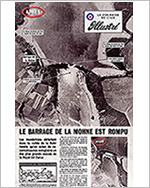 Psychological Warfare and Propaganda In World War II: Air Dropped and Shelled Leaflets and Periodicals consists of over 1,000 air dropped and shelled leaflets and periodicals created and disseminated during the Second World War. The majority of items in this collection were printed by the Allies then air or container dropped, or fired by artillery shell, over German occupied territory. Many leaflets and periodicals have original publication codes and were printed in over 10 languages. Only shelled leaflets, Germans to Allies (115 items), are in English.