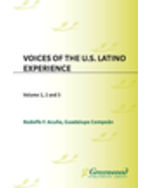 The bulk of the primary documents concern Mexico and the United States and Mexican Americans, who paved the way for immigrants from Cuba, Puerto Rico, the Dominican Republic, and Central and South America to come. The scope also includes primary documents pertaining to events in Latin American and Caribbean history that have had an impact on these groups. Each primary document has a short introduction, placing it in historical and cultural context. An introduction that gives an historical overview, a chronology, a selected bibliography chock full of useful websites, and a set index provide added value. Sample documents: memoirs of early Texas; commentary by a Mexican diplomat on the Treaty of Guadalupe-Hidalgo of 1848; an essay on the social condition of New Mexico in 1852; Cuban independence leader Jose Marti in New York on race (1894); El Corrido de Gregorio Cortez -- a ballad about a Mexican who stood up to the Texas Rangers in 1901; excerpts from an autobiography by Ella Winter on school segregation in the 1930s; a Latino soldier's reminiscences of World War II; testimony from a Bracero worker in the 1950s; an article on Cuban Miami in the 1960s; socioeconomic profile of Dominicans in the United States in 2000; and an interview with Subcomandante Marcos from the Zapatista Army of National Liberation.