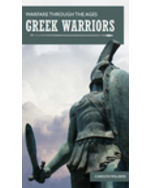 While Achilles and the other heroes who fought in the Trojan War are, as far as we know, fictional, the warriors of Ancient Greece are nearly as fascinating. The volume traces the evolution of the ancient Greek warrior, from the Persian Wars, the Peloponnesian War, to the rise of Macedonia under Philip II and Alexander the Great. Attention is paid to infantry, including the famous hoplites, cavalry, and naval forces. Sidebars highlight key concepts and figures, while photographs of ancient sculpture, vase paintings, and artifacts offer a glimpse into this distant world.