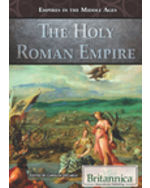 A bit of a misnomer, the Holy Roman Empire was never centralized enough to form a cohesive government, language, or system of law, but its political and religious authority reigned over parts of Europe for over a thousand years. Beginning with the papal crowning of Charlemagne in 800 A.D., its transition in the tenth century under Germanic rule through to the House of Hapsburg, and on to its subsequent division via Napoleon Bonaparte, this dramatic text unpacks the legacy of this often-imitated empire.