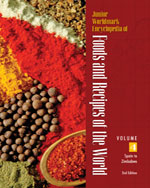 This 4-vol. set provides comprehensive coverage of the foods and recipes from 75 representative countries and culture group worldwide -- from Algeria to Zimbabwe. Entries provide 10-15 recipes for each group and include data on the agriculture and dietary habits of each group as well as an overview of each group's nutrition and health. Arranged alphabetically by country, entries also describe both traditional and modern methods of preparation and cooking foods. For each country/group, the Encyclopedia covers: foods for religious and holiday celebrations, foods of the group, geographic setting and environment, history and food, mealtime customs, politics, economies and nutrition, and more.

"This 4-volume set contains more than 700 recipes from 57 countries around the world. While the recipes were selected to reflect both traditional national dishes as well as modern lifestyles, the editor has tried to balance authenticity with ease of preparation. ... The arrangement of the set makes it very accessible. ... All entries include several sources for further study, including books, films, and Websites. ... Most entries include roughly 10 black-and-white photographs. Volume 4 includes an excellent index, which provides access by region, recipe name, and type of food. A table of measurements and conversions, a guide to getting started with cooking, and a glossary of cooking terms are repeated in the front of each volume." -- ARBA (2002)

"A disappointing effort...the deficiencies of this set do not make it a worthwhile purchase." -- School Library Journal (May 2002)

"This set comes from a veteran in foreign cookery and a well-respected reference book publisher and so the reader is in for an authentic culinary treat. The undertaking was ambitious. The set contains more than 700 recipes representing 57 countries. The editors sought help of specialists from various countries to insure accuracy...The measurements and conversions alone are interesting. These might provide a math class with some good experience in converting recipes from U.S. to metric or vice versa. This set might be helpful when visiting a foreign country. A reader may be tempted to try some of the native favorites instead of limiting yourself to cokes and hamburgers." -- Catholic Library World (June -- August 2002)

"...This set will be useful for students writing reports...Basic health and safety tips, a glossary of cooking terminology and procedures, and suggestions for finding exotic foods are supplied in the introduction." -- VOYA (December 2002)

"...could have been a major breakthrough...useful information here about food and dietary customs,..could have been a visually enticing, innovative introduction to different cultures and ethnic groups." -- Booklist (Febraury 2002)

"A valuable addition to social studies titles; useful for projects or in planning an international festival." -- Book Report (May 2002)