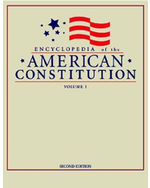 This 6-volume update of the 1987 Dartmouth Medal winner includes all of the material from the original 4-volume set and 1992 Supplement, as well as updated original articles and completely new articles covering recent concepts and court cases since 1992. New material (which is alphabetically integrated throughout the set) covers such topics as adoption, race, and the Constitution; birthright citizenship; Clinton v. Jones; disability discrimination; hate crimes; modern militias; Violence Against Women Act; and more. Appendices include a case index and primary documents.

The articles in the set provide comprehensive coverage of all aspects of constitutional law, as well as biographies of people who have had an impact on our government's legal framework (supreme court justices, presidents, cabinet members, lawyers, and more). Judicial decisions handed down by the Supreme Court are also analyzed. Congressional laws, executive orders and other public acts that impacted our legal structure are also examined. Finally, articles also cover historical periods (of the Court as well as US historical eras). Contributors---all professionals (lawyers, historians, and political scientists) who had their own impact in the topics covered in this set---focused their writing on the constitutional aspects of the topics.

"This edition updates the coverage of such key issues as the state regulation of commerce, the taking of property, substantive due process, and executive privilege. It also offers new information on key judicial personnel, such as U.S. Supreme Court justices, and assesses both classic and current theories of constitutional analysis (e.g. critical race and feminist theories). Cross references allow readers to pursue related and additional items throughout this outstanding work. Highly recommended for all public and academic libraries." -- Library Journal (November 1, 2000)

"...this is essential for most academic and large public libraries." -- Library Journal (April 2001)

"The most important document in American political history deserves a work such as this. It is not strictly legal or academic, but is intended for the general public as well as students at most levels...It is recommended for the government and political science sections of all academic and public library reference collections; the older edition can be placed in the circulating collection."-- American Reference Books Annual 2001

"[T]his amazing reference resource covers every major issue to come before the Supreme Court . . . This is an essential tool." -- Blanch Woolls and David Loertscher, Reference Reviews on galegroup.com

"The second edition of Macmillan's Encyclopedia of the American Constitution is even better than the first, taking a novel but very workable approach to updating a title that garnered considerable praise when it first appeared in 1986 -- a masterful contribution to the reference literature. It fulfills its mission of bridging the disciplines of history, law, and politics using language that is accessible to a mixed audience ranging from high-school students and the general public to constitutional law scholars. It is recommended for public, secondary, academic, and law school libraries, as well as appropriate special libraries." -- Booklist/Reference Books Bulletin, (STARRED REVIEW) December 1, 2000

"[T]he Encyclopedia of the American Constitution has served libraries well as one of the premier resources for the constitutional history of the United States." -- John Lawrence, Reference Reviews on galegroup.com

"Carefully planned and well carried out ... succeeds in conveying an accurate and comprehensive understanding of the wisdom and complexity of the American constitutional process ..." -- Booklist/Reference Books Bulletin (review of the 1st Edition)