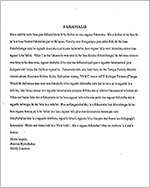 The Pan Pacific and Southeast Asia Women's Association (PPSEAWA) was founded in Honolulu, Hawaii in 1930 with the intention to "strengthen the bonds of peace among Pacific peoples by promoting a better understanding and friendship among the women of all Pacific countries." The women organizers sought to "promote cooperation…for the study and betterment of existing conditions" throughout the Pacific Rim. The Association initially conducted its work primarily through international meetings where delegates shared information and raised awareness about international women's issues.

The American section of the International organization—the PPSEAWA-USA, the entity that generated the majority of the records in this collection—has had chapters in cities that ranged from New York City to Stockton, California and Valdosta, Georgia. The Toledo, Ohio and New York City chapters became the most active U.S. chapters in the 1950s and 1960s, a time in which PPSEAWA was among a group of internationalist organizations promoting stronger alliances between the U.S. and Pacific Rim countries. In the early 1950s, PPSEAWA established consultative status at the United Nations and UNESCO as a non-governmental organization. Although PPSEAWA was not oriented toward political advocacy, this network exerted an influence on and was influenced by liberal Col War foreign policy. Declaring its "unique function" to bring together women "not as specialists or feminists but as people interested in exchanging ideas and practical experiences," PPSEAWA-USA sponsored programs that brought together clubwomen activists with diplomats and cultural ambassadors. Events such as lectures and fashion shows were designed to foster personal interactions as well as intercultural appreciation.