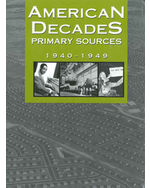 The United States of the 1940s marked the beginnings of significant social and political change. Men were shipped off to fight in World War II, and women entered the workforce in larger numbers than ever before to "hold down the homefront," earning a taste of what it meant to be independent. African Americans fought beside their white counterparts in the war and returned home unwilling to accept the inequality under which they'd lived for so long. The United States ushered in the nuclear age with the atomic bombings of Hiroshima and Nagasaki, but also solidified its role as an international leader by helping to rebuild Europe and Japan under the Marshall Plan. The Soviet Union --once an ally -- became a feared enemy, and Americans looked for communists in their midst while the U.S. government shifted its policies from world war to Cold War. But while the government prepared to fight the communists, the public enjoyed the offerings of the first supermarkets.

"This carefully crafted new offering from Gale is sure to be a worthy heir to the discontinued classic documentary American history reference source, The Annals of America (Encyclopaedia Britannica, 1968-1987),.. Gale's latest contribution to the field is intended to serve as a companion to their popular series, American Decades (Gale Group, 1994-2001) and would complement many of the publisher's other prominent reference works in American history, notably the two-volume stand-alone Gale Encyclopedia of Multicultural America: Primary Documents (see ARBA 2001, entry 271). This work will also make an ideal companion set for the many libraries that already own The Annals, as this new work offers limited coverage, its entries usually provide essays about and excerpts from primary sources rather than the full text of the sources themselves, it is more comprehensive, and despite some inevitable overlap, its selections are generally different...American Decades: Primary Sources is certain to become the centerpiece of many serious American history reference collections. This new work is so innovative and well done that it may become a classic itself, and at its advertised price of less than $100 for each sturdy, well-designed volume, well worth the investment." --ARBA (2004)

"Aimed at the high-school and undergraduate levels, but definitely accessible to middle-schoolers, this set is a treasure trove of more than 2,000 primary sources on U.S. history and culture represented by more than 75 types of sources, such as architectural drawings, graphs, letters, magazine articles, memoirs, reports, Supreme Court decisions, speeches, and literary works. This resource is excellent as a companion to the American Decades (Gale, 1996-2000) set or as a stand-alone. Even if a library had access to all of the books, periodicals, and other items used as sources, they would lack the surrounding context and the added features, not to mention the convenience. Secondary school libraries in states with curriculum standards that require access to primary resources should place this on their priority purchase lists if they can afford it. Undergraduate and public libraries supporting historical research should also consider purchase."--Booklist (April 2004)

"This set provides access to information that will be difficult to find in other places without a great deal of weeding. It can begin the student thinking critically about events in history. Your students need access to this set, especially if you have American Decades."--Reference for Students (www.gale.com) (May 2004)