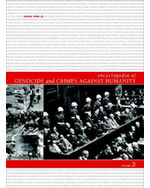 Encyclopedia of Genocide and Crimes Against Humanity, 1st Edition

Genocide has been with us since the beginning of history and is a key feature to the study of world history at nearly every level. The most widely studied and catastrophic examples are, however, historically close to the present day: the Nazi Holocaust, "ethnic cleansing" in Bosnia, tribal warfare in Rwanda, and more. The Encyclopedia spans the globe to explain the issues behind crimes against humanity and human rights issues as they relate to individual countries and the world at large. It traces the history of events that qualify as genocide and crimes against humanity, profiles perpetrators and heroes, and explains international laws and law proceedings aimed at ending genocide and crimes against humanity. It also delves into depictions and manifestations of the phenomenon, such as propaganda, sociological and philosophical explanations, literature, and film.

"...is a good choice for purchase by most high school libraries, large public libraries, and most law school libraries. And libraries and colleges offering courses in political science and human rights, sociology, or journalism." --Catholic Library World, June 2005