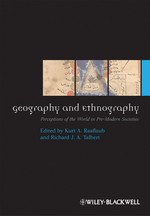 Geography and Ethnography: Perceptions of the World in Pre-Modern Societies, 1st Edition

Societies have typically reflected upon their place in the world in relation to the space in which they live, those who surround them, the universe, and divine forces that they believe determine their fate. In this fascinating volume, the editors bring together leading specialists who have analyzed the thoughts and records of a wide range of pre-modern societies from around the globe and across the ages. Some societies, like the Chinese, Greeks, and Arabs, have left extensive written cultural and scientific documentation. Others, as in India and Mesopotamia, used myth and epic for memory and understanding. Still others, such as the Incas and Aztecs, did not write, but their ideas and beliefs can be recovered from later narratives, as well as from their artwork, monuments, and shaping of the landscape. A wide range of common questions are examined, from evidence, interpretations, and methodology, to the way geographic and ethnographic concepts and views of the cosmos were developed and expressed. The resulting cross-cultural comparisons clearly describe the specific characteristics of these societies, how they differ and overlap. What emerges is a rich and astonishing variety of responses developed to meet universal challenges.

Front Cover.
Half Title Page.
Other Frontmatter.
Title Page.
Copyright Page.
Contents.
List of Figures.
Notes on Contributors.
Series Editor's Preface.
1: Introduction.
2: Where the Black Antelope Roam: Dharma and Human Geography in India.
3: Humans, Demons, Gods, and Their Worlds: The Sacred and Scientific Cosmologies of India.
4: Structured Perceptions of Real and Imagined Landscapes in Early China.
5: Nonary Cosmography in Ancient China.
6: Knowledge of Other Cultures in China's Early Empires.
7: The Mississippian Peoples’ Worldview.
8: Aztec Geography and Spatial Imagination.
9: Inca Worldview.
10: Masters of the Four Corners of the Heavens: Views of the Universe in Early Mesopotamian Writings.
11: The World and the Geography of Otherness in Pharaonic Egypt.
12: On Earth as in Heaven: The Apocalyptic Vision of World Geography from Urzeit to Endzeit According to the Book of Jubilees.
13: “I Know the Number of the Sand and the Measure of the Sea”: Geography and Difference in the Early Greek World.
14: Continents, Climates, and Cultures: Greek Theories of Global Structure.
15: The Geographical Narrative of Strabo of Amasia.
16: The Roman Worldview: Beyond Recovery?.
17: The Medieval Islamic Worldview: Arabic Geography in Its Historical Context.
18: The Book of Curiosities: An Eleventh-Century Egyptian View of the Lands of the Infidels.
19: Geography and Ethnography in Medieval Europe: Classical Traditions and Contemporary Concerns.
20: Europeans Plot the Wider World, 1500–1750.
Index.