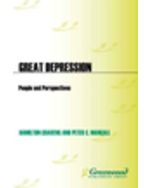 With a 25 percent unemployment rate, the closure of 5,500 banks, and 32,000 business bankruptcies, the impact of the Great Depression was widespread and catastrophic. However, the impact on the day-to-day lives of ordinary Americans is the strongest indicator of the Depression's devastation.Who were the people waiting in the bread lines and living in Hoovervilles? Who were the migrants heading North and West? Did anyone survive the Depression relatively unscathed?

Giving a voice to stories often untold, Great Depression: People and Perspectives covers the full spectrum of American life, portraying the experiences of ordinary citizens during the worst economic crisis in the nation's history.

Great Depression shows how specific groups coped with the traumatic upheaval of the times, including rural Americans, women, children, African Americans, and immigrants. In addition, it offers revealing chapters on the conflict between social scientists and policymakers responding to the crisis, the impact of the Depression on the health of U.S. citizens, and the roles that American technology and Hollywood movies played in helping the nation survive.