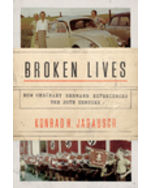 This book describes the gripping stories of ordinary Germans who lived through World War II, the Holocaust, and Cold War partition—but also recovery, reunification, and rehabilitation. The title offers an account of the 20th century as seen through the eyes of Germans who came of age under Hitler and whose lives were scarred and sometimes destroyed by what they saw and did. Drawing on memoirs of Germans born in the 1920s, it chronicles the unforgettable stories of people who lived through the Third Reich, World War II, the Holocaust, and Cold War partition, and who also participated in Germany's astonishing postwar recovery, reunification, and rehabilitation. Written decades later, these testimonies look back on the mistakes of young people caught up in the Nazi movement. In many, early enthusiasm turns to deep disillusionment as the price of complicity with a brutal dictatorship--fighting at the front, aerial bombardment at home, murder in the concentration camps—becomes clear.