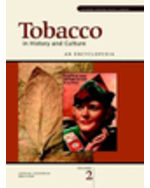 Tobacco in History and Culture: An Encyclopedia, 1st Edition

Tobacco in History and Culture explores how tobacco became one of the most important commodities in the history of world trade and the source of one of the biggest public health concerns in modern history. Originally used by Native Americans for medicinal, religious and social purposes, tobacco quickly became the biggest export from the American colonies. By the mid-1990s, more than 14 billion pounds of tobacco leaf were grown worldwide each year, with international treaties governing its advertising and distribution. It has affected agriculture, religion, social customs, business and trade, government policy and medicine in many countries. The unique and innovative reference work presents entries on all aspects of tobacco and from a global perspective, providing support for assignments at many levels and in a variety of fields, including history, economics, government and health.

Tobacco in History and Culture is the first set in a new reference line, the Scribner Turning Points Library. Future titles will explore other discoveries and historical events that have changed the direction of human societies worldwide, whether through sudden upheavals or gradual evolution.

"The set is nicely laid out, with interesting sidebars and helpful explanations of terminology adjacent to related articles. There are also some 250 illustrations - graphs, charts, drawings and photographs. These include eight-page color inserts in each volume. Rounding out the work is a timeline and a detailed index." -- Catholic Library World (March 2005)

"The set includes useful demographics and statistics on consumption, tables, and scientific research and correlations; it will prove an invaluable resource for students preparing research papers...Recommended for all libraries." -- Library Journal (January 2005)

"This makes an excellent starting point for readers looking for a quick entrance to the vast body of knowledge of the history and diversity of tobacco uses, tobacco health, addiction, social control issues, advertising, production, and distribution, among other topics. Highly recommended." --Choice, August 2005