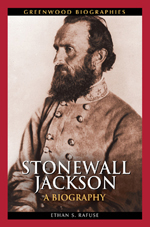 Thomas J. "Stonewall" Jackson was one of the greatest generals of the Civil War and remains an iconic figure of American history. This book offers a complete yet concise account of Jackson's life and career, illuminating the forces and events that shaped both. The study is organized chronologically, beginning with Jackson's hardscrabble upbringing in the mountains of western Virginia. It follows him through the experiences that brought him to 1861, when he won the nickname "Stonewall" on the battlefield of the first great battle of the Civil War, and then traces his military career and role in the Confederate victories of 1861-1863. Throughout, the biography never loses sight of the man himself. Readers will understand both Jackson's impact on military history and the qualities that enabled him to achieve personal satisfaction and fame as one of history's great soldiers.

Front Cover.
Half Title Page.
Recent Titles in Greenwood Biographies.
Title Page.
Copyright Page.
Dedication.
Contents.
Series Foreword.
Preface.
Timeline: Events in the Life of Stonewall Jackson.
1: Making of a Soldier.
2: The Young Lieutenant.
3: Tom Fool.
4: Stonewall.
5: Valley Commander.
6: We Shall Get Them on the Run.
7: The Battles for Richmond.
8: Who Could Not Conquer?.
9: The Campaign in Maryland.
10: Fredericksburg.
11: Allow Nothing to Stop You.
12: Under the Shade of the Trees.
Afterword.
Further Reading.
Index.
About the Author.