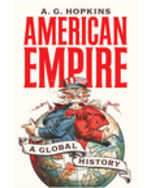 This title provides a new history of the United States that turns American exceptionalism on its head. It is a panoramic work of scholarship that presents a bold new global perspective on the history of the United States. Drawing on his expertise in economic history and the imperial histories of Britain and Europe, the author takes readers from the colonial era to today to show how, far from diverging, the United States and Western Europe followed similar trajectories throughout this long period, and how America’s dependency on Britain and Europe extended much later into the nineteenth century than previously understood. The book goes beyond the myth of American exceptionalism to place the United States within the wider context of the global historical forces that shaped the Western empires and the world.

Front Cover.
Half Title Page.
Other Frontmatter.
Title Page.
Copyright Page.
Other Frontmatter.
Contents.
Illustrations.
Preface.
American Empire.
1: Prologue: Lessons of Liberation: Iraq, 1915–1921.
2: Three Crises and an Outcome.
Decolonization and Dependence 1756–1865.
3: The Advance and Retreat of the Military-Fiscal State.
4: From Revolution to Constitution.
5: The Struggle for Independence.
6: Wars of Incorporation.
Modernity and Imperialism 1865–1914.
7: Uneven Development and Imperial Expansion.
8: Achieving Effective Independence.
9: Acquiring an Unexceptional Empire.
10: Insular Perspectives on an Intrusive World.
11: Intermission: Tarzan's Mirror to Modernity.
Empires and International Disorder 1914–1959.
12: The Modern Imperial System: From Conquest to Collapse.
13: Ruling the Forgotten Empire.
14: Caribbean Carnival.
15: Paradise in the Pacific.
16: “The Twilight of Confused Colonialism”.
The Outcome: Postcolonial Globalization.
17: Dominance and Decline in the Postcolonial Age.
18: Epilogue: Lessons of Liberation: Iraq, 2003–2011.
Notes.
Index.
Also in the Series.