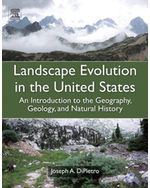 Landscape Evolution in the United States is an accessible text that balances interdisciplinary theory and application within the physical geography, geology, geomorphology, and climatology of the United States. Landscape evolution refers to the changing terrain of any given area of the Earth's crust over time. Common causes of evolution (or geomorphology—land morphing into a different size or shape over time) are glacial erosion and deposition, volcanism, earthquakes, tsunamis, tornadoes, sediment transport into rivers, landslides, climate change, and other surface processes. The book is divided into three main parts covering landscape components and how they are affected by climactic, tectonic and ocean systems; varying structural provinces including the Cascadia Volcanic Arc and California Transpressional System; and the formation and collapse of mountain systems. The vast diversity of terrain and landscapes across the United States makes this an ideal tool for geoscientists worldwide who are researching the country's geological evolution over the past several billion years.