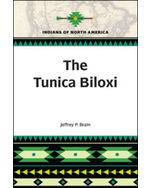 The Tunica Biloxi, part of the Indians of North America series, presents a fascinating portrayal of the history and culture of these native people. The Tunica and the Biloxi have always lived on the fertile lands along the Mississippi River in what are today Mississippi and Louisiana. In the late 17th century, the Tunica tribe first encountered French explorers, who claimed the Indians' homeland for their king. The tribe would later come under the control of England, then Spain, and then finally the U.S. They faced pressure to assimilate into American society, but managed to preserve many Tunica traditions. The Tunica tribe and the remnants of several neighboring tribes, including the Biloxi, merged together and became recognized by the U.S. as the Tunica-Biloxi tribe in 1981.