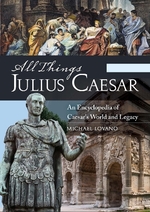 All Things Julius Caesar: An Encyclopedia of Caesar's World and Legacy, 1st Edition

Far from being "ancient history," Roman history and culture from the time of Julius Caesar and the Roman Empire have surprising parallels with the political strife and societal issues in 21st-century life. Interest and awareness have also been bolstered by recent successful Hollywood films as well as television series that depict Roman history. All Things Julius Caesar: An Encyclopedia of Caesar's World and Legacy provides a unique reference on topics and themes related to the life and times of Julius Caesar. It offers historically accurate information about what he did-and did not-do, and examines his impact on later eras via images and idealized depictions of him popularized in literature and other media up to the present. The approximately 200 entries in this two-volume set are organized alphabetically according to topic or theme-for example, individuals such as Marc Antony, places such as the province of Gaul, events such as Roman elections or battles in the Civil War, and institutions such as Roman classes, slavery, patrons, and clients. The entries cover all the territories of the Roman Empire during Caesar's time, from Britain to Egypt. The set includes primary documents such as excerpts from ancient letters, essays, and biographies and supplements the text with images and maps. The bibliography provides print and electronic resources suitable for high school and college student research as well as further reading for general audiences.