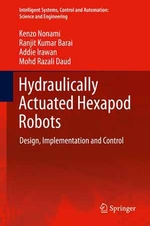 Legged robots are a promising locomotion system, capable of performing tasks that conventional vehicles cannot. Even more exciting is the fact that this is a rapidly developing field of study for researchers from a variety of disciplines. However, only a few books have been published on the subject of multi-legged robots. The main objective of this book is to describe some of the major control issues concerning walking robots that the authors have faced over the past 10 years. A second objective is to focus especially on very large hydraulically driven hexapod robot locomotion weighing more than 2,000 kg, making this the first specialized book on this topic. The 10 chapters of the book touch on diverse relevant topics such as design aspects, implementation issues, modeling for control, navigation and control, force and impedance control-based walking, fully autonomous walking, walking and working tasks of hexapod robots, and the future of walking robots. The construction machines of the future will very likely resemble hydraulically driven hexapod robots like the ones described in this book – no longer science fiction but now a reality.