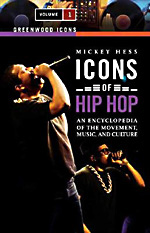 Icons of Hip Hop: An Encyclopedia of the Movement, Music, and Culture, 1st Edition

From Run DMC, the legendary group credited with bringing rap to the mainstream, to Salt N Pepa, the first all-female groups to stake their claim in the male dominated world of hip-hop, to Kanye West's breakout career as a producer and rapper, this encyclopedia recovers the histories of important artists both inside and outside the hip-hop mainstream, all while examining the varied and ever-changing forms of the music. Comprehensive profiles are enhanced by sidebars highlighting such topics as rivalries between artists, the importance of geographic region, musical innovations (including sampling technologies), legal issues, media scandals, and wider phenomena, movements, or styles of hip-hop that were sparked by a particular artist or group.

Hip-hop fans will appreciate the critical analysis of the icons' social and cultural impact as well as issues of enduring significance, such as the influence of gangsta rap on youth culture. A timeline, a comprehensive introduction, numerous photos, and an extensive bibliography of print and electronic sources for further reading are included, making this encyclopedia a crucial reference for teachers and students interested in understanding the history and future of hip-hop music.