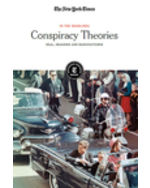 Who really killed JFK? Was 9/11 an inside job? Has anyone seen Obama's birth certificate? Conspiracy theories have been around for years, often surrounding the lives of political figures and national tragedies. In recent years, conspiracy theories have been moving from the fringes to the mainstream, receiving national attention from Alex Jones' Infowars, and President Donald Trump's embrace of far-right conspiracies. The articles in this book trace conspiracy theories from their historical foundations to their modern representations, showing how these ideas can grow until they have a life of their own. Media literacy questions and terms will challenge readers to further analyze reporting styles, devices, and the veracity of sources.